Ruth Ware's Writing Process, Next Novel, and Tips | The Newsette

About Her Writing Process, Next Novel, and Advice to Young Writers 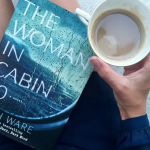 Ruth Ware is the #1 New York Times bestselling author behind your favorite thrillers–In a Dark, Dark Wood, The Woman in Cabin 10, The Lying Game, and her newest book, The Death of Mrs. Westaway. Her novels have been optioned for film, and are beloved by millions of fans across the globe, including celebrities like Reese Witherspoon (no big deal). Currently living near Brighton in the UK, Ruth is widely regarded as one of the most successful psychological thriller writers in the industry. I had the pleasure of asking this literary phenomenon our most pressing questions–concerning Ruth’s writing process, her next novel, and her advice to young writers. Find all of Ruth Ware’s captivating responses below.

Writing a book is a long whirlwind of an endeavor. What are the beginning stages of your writing process like?

I tend to start thinking about a new book when I’m coming to the end of its predecessor, and all the time I’m editing my current book, I’m thinking about the characters and the setting and the plot. So by the time I actually sit down to write, I will have been living with these characters for quite a few months, and hopefully know them pretty well.

Your books are famous for their impeccable plotting. I’m particularly fond of the twists and turns in “The Woman in Cabin 10”—never saw the ending coming! How do you keep all of the different storylines and red herrings organized? Do you make a very detailed outline and stick to it?

Thank you! That is probably the highest compliment you can pay a mystery writer. This may surprise people, but I don’t really outline – at least, not usually. I sometimes do a brief outline for my editors if they want to be able to talk about the book to their colleagues, but I don’t plot out every twist and turn. I find I have to write them in order to figure out how to make it work – it’s sort of like doing a card trick or performing sleight of hand. There’s no point in trying to describe to someone what you’re going to do, you just have to give it a go, and see if you can pull it off. Sometimes I think something is going to come out one way, and in the writing process it becomes apparent that I can’t pull it off, or (which is much more enjoyable) that something else would be infinitely more interesting and surprising. I do usually have a good idea of the basic bones though – who dunnit and why. But the twists and turns come afterwards.

Every book is different, but there is often a long slog in the middle when your initial burst of inspiration has run out, and the ending seems about a million words away, and you’re not sure if you’re ever going to make it, or if this book is going to be a pile of poo. My favourite parts are the beginning – when anything seems possible and you’re just falling in love with these characters – and the very end, when you’re whipping it into shape and the book somehow comes into focus in the editing process, and becomes so much sharper and cleaner and better than you had thought possible four months ago.

Have you ever reached the end of writing a manuscript only to decide to make a huge change to the story?

I have had endings that surprised me – characters that refused to die, or scenes that played out very differently to how I thought. And sometimes that entails going back and rewriting other sections. I don’t think I’ve ever made a huge change to the story though.

Do you have any interest in revisiting writing outside of the psychological thriller genre?

For the moment no, I’m enjoying writing thrillers. But I could definitely imagine writing something different further down the line. I would love to write a full on historical novel.

Your newest book The Death Of Mrs. Westaway is filled with several classic Gothic elements, a slight departure from your previous work. Was this more of a passion project for you than your other works, given your study of older literature in university?

No, I wouldn’t say it was more personal or different to my other books, it just somehow ended up being different in tone. But that wasn’t a deliberate decision on my part.

Can you share any updates on the several film adaptations of your books?

I’m afraid I know almost nothing!

How many iterations do your major plot twists typically go through?

I’m not really sure how to answer this question because I write the books virtually as you read them. I’m not a multiple drafts / multiple versions kind of person. I just write the book like I’m reading it, scene by scene, in the order they occur in the book, and that’s pretty much how they end up in the printed version. That’s not to say I don’t get edited – I do! But it’s more that my editors say things like “I think we need more of this character” or “I’d love a scene where we get to see why she’s suspicious of X” and stuff like that. I have never sat down and changed a twist, or written in a big reveal, I feel like that would cause almost unimaginably complicated ongoing effects, like trying to unpick one stitch in a knitting pattern, the whole thing would unravel.

Can you speak to your journey to success, and the difficulties you might have experienced before landing your agent and first publishing deal?

Being a writer requires talent, persistence, and a big dollop of being in the right place at the right time. I did get quite a lot of rejections along the road, but I think the thing that surprises people most is how many books I wrote before I even tried to get published. There’s an idea that you’ll sit down to write a novel, send it out, and hey presto, there’s your book deal. But most people have to learn their craft, and for me I learned it by practising, and practising, and practising. I started writing in my teens and I had written probably over a dozen novels by the time I wrote one I thought was good enough to send to agents. When people say things like “I can’t believe this is a debut, the writing is so assured” – well, there’s a reason for that, it’s probably highly unlikely that that’s the first book the author has written.

Do you have any advice for young writers looking to be published one day?

I would say, keep plugging away, keep trying, but also, don’t be in too much of a hurry, and don’t be too hard on yourself if things don’t work out straight away. It’s ok to take some time to get things right. The media are always fascinated by young writers, people fresh out of college who walk into a five book deal, so it can be easy to think that’s the norm, but I wrote for probably twenty years before I wrote a book I couldn’t bear to shelve.

Finally—would you give us 5 words to describe the novel you’re currently working on?

For more from Ruth Ware, read The Death of Mrs. Westaway, available now!