Actress, This Is The Year 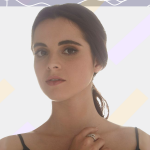 Talking to Vanessa Marano feels a lot like being on Gilmore Girls… which is cool, because she played Luke’s young daughter April during the show’s most addictive episodes. (She’s also starred in Switched at Birth, Saving Zoe, and the most underrated Lifetime movie of all time, Restless Virgins.) Vanessa is fast and funny, and you get the sense that if she’s talking about it, she cares about it. Like, really.

That’s certainly the case with This Is The Year, the new teen movie directed by David Henrie and produced by Selena Gomez. “It’s a road trip movie; it’s a love story; it’s a friendship story—and it’s so much fun, even if you’re not a teenager.” says Vanessa from her home in LA. “Actually, maybe especially if you’re not a teenager.” Here’s what it’s like working in Hollywood during a pandemic, having a sister with the exact same job, and dealing with “child star” stereotypes that (spoiler alert) aren’t real.

Why is This Is The Year special for you?
Because it’s David Henrie’s directorial debut—David, his brother, and his dad were doing this film together, the same way my sister and my mom and I did Saving Zoe as a family. And I know what it’s like, being a child actor transitioning into adulthood, telling a story you want to tell… Plus, it’s so funny. I love ‘80s and ‘90s teen movies, and this is totally in that lane.

Classic teen movies usually follow a guy-gets-the-girl formula. Do you think they can still be modern?
Sure, but it’s all about the characters, right? The reason I love This Is The Year is because I’m not playing a typical girl. She’s nerdy and she knows it, and she’s confident as hell about it. She knows you can be cute and rock clothes and be a super-genius. She doesn’t do the “dork” stereotype. She’s awesome.

Speaking of stereotypes, there’s a weird one that child actors are all messed up adults.
And then people say, “child actors will never be talented adult actors,” which is also not true.

What’s the best thing about being a “former child star?”
First, I’ll say Hollywood can be hard if you don’t have a great support system. My parents and my sister [Laura Marano] are amazing, and that really mattered. Nobody pushed me, nobody even wanted me to act—I was just dying to do it! And I loved being a child actor, because it gave me a tremendous work ethic… You know, my dad is an immigrant. He came to America when he was 13. He worked; his whole family worked; I took such pride that I got to work, too.

You mentioned your sister, Laura, who’s also an actor. Do you bond over work stuff, or do you prefer to keep your careers separate?
We’re definitely not separate. We actually audition for the same things all the time—all the time! But we’ve done that since we were children, and because of our parents, we’ve always known that if one of us succeeds, both of us succeeds. We’ve also been tremendously lucky, because we’ve both had steady work. She was on Austin & Ally when I was on Switched at Birth. And because of her, I’ve always known that women at work should always be allies—no matter what Hollywood says.

Has that been an issue?
I feel like in any industry, but specifically Hollywood, they try to pit us against each other all the time. We used to talk about it a lot on the Switched at Birth set—Lea [Thompson], Katie [Leclerc] and I. Because we were all sisters, you know? Tight, respectful, in awe of each other, and that was a conscious effort. It’s so easy to fall into that trap that every woman is competing with every other woman at work. It’s up to us to break that cycle.

Are you ever jealous when someone gets a part you want?
Look, jealousy is normal, but we can acknowledge it and still be able to celebrate another woman’s win. That helps us grow. We have to be there for each other.