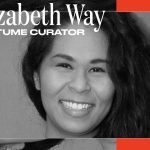 She’s addressing the issue. Elizabeth Way is the editor of Black Designers in American Fashion, a new book shedding light on influential designers previously overlooked by textbooks. “American fashion would have never existed without Black designers,” she says. “If you took that element out of fashion—if you took that element out of any part of American culture—the whole house collapses.” (Agreed.) She’s also a costume curator for The Museum at FIT, which means she basically gets paid to stare at magnificent gowns all day.

Here’s how the 35-year-old landed her dream job, which current designers she’s got her eye on, and why she thinks even miniskirts can be masterpieces.

Costume curator is the job women have in romcoms. How did you break into the field?
I loved fashion as a teenager. I was cutting my clothes and trying to create new things. I read a lot of fashion magazines—Vogue, W, Harper’s Bazaar—cover-to-cover every month. I majored in apparel design at the University of Delaware thinking I could be a designer. I also loved history, so I double majored. I worked briefly as a pattern maker, but by the time I graduated, I realized I wasn’t going to be a designer. But I always had this interest in history, so I tried to explore that—first through theater costuming, then I discovered the program I attended for my master’s at NYU in costume studies. That set me on the path to curating.

Black Designers in American Fashion is based on a 2016 FIT exhibit. How did the project start?
It was actually conceived by my co-curator Ariele Elia. She and I had both seen a small show at the Pratt Manhattan Gallery. One of the school’s professors, Adrienne Jones, had curated a show of 10 contemporary Black designers. Part of that was this huge wall graphic that listed as many Black designers as the curator and her team could compile. Ariele started thinking about how many of those designers were in our collection, and that’s what got her going with Black fashion designers. My master’s research and ongoing research focused on the intersection of African American history and fashion, so she asked me to co-curate.

What made you decide to turn the exhibit into a book?
You know, a lot of what I do as a curator is writing, and one thing people [said] about the exhibition is that we didn’t have a book. I was having lunch with one of my old professors, Nancy Deihl, who’s one of the authors of the book. She had just come out with a really amazing book called The Hidden History of American Fashion that focused on unsung female designers. She said, “You know, you could do something like this with Black designers.” I told her, “That sounds like a lot of work.” But she really encouraged me and she was like, “I’ll write a chapter for you.” That’s really what got me going… I don’t think of Black Designers in American Fashion as the “book version” of that show we did, but as a way to do some writing and also reach out to the amazing fashion historians who’ve been looking at Black fashion for years.

Historically, Black designers have been notoriously undervalued. How did you try to change that narrative?
You could write a whole library of books on the way Black people and Black style have influenced fashion culture. There are really important designers, such as Willi Smith and [Elizabeth Keckley], who some people know a little bit about, but are really overlooked as to how influential they are on the way we dress today. You know, almost anyone can open up their closet and find something that was influenced by these people.

Which contemporary designers should be on our radar right now?
There are so many designers who I think are amazing! Grace Wales Bonner is [a designer] like Kerby Jean-Raymond—so intellectual; she’s based in London. Duro Olowu is also in London. There are so many designers doing insightful work, who are looking at different aspects of culture and bringing them to the forefront. That’s what I look at as a curator. There are obviously designers who do things that just look amazing, but I’m always looking for a deeper story as well.

Has this project affected your relationship with fashion at all?
Absolutely! My area of focus is the 19th century, and I kind of stepped out of my comfort zone writing about Scott Barrie and the 1970s. He was a designer I really grew interested in when I did Black Fashion Designers, and I was lucky enough to connect with his business partner [Robbie Marks]. Getting her oral history and her perspective opened up a whole new area of research. I knew I had to write this chapter, so learning more about New York in the ‘70s and ‘80s and that fashion culture really made me hungry to learn more.

How has working with stunning garments all day impacted your personal style?
It’s funny. I dress very New York, but it’s subtle. I wear a lot of black. We always joke at the museum that it’s the curator’s uniform. I really think of clothes as artworks that belong in museums, more than I think about how they’re incorporated into my own life. I’m not a huge shopper of designer brands or anything; I really appreciate them more from afar. Once it enters the museum, it’s not a garment. And we absolutely don’t try them on. Never!