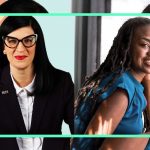 They’ve got a lot to talk about. Kate Kelly is a human rights lawyer and advocate for female leaders in religious spaces. Jamia Wilson is a Random House VP and executive editor with 7 books to her name (so far…). Together, they are She-Ra: Princess of Power! No, not really. But they do host Ordinary Equality, a must-listen podcast about rights, freedoms, and the women who dare to demand them.

Here’s how they’re talking to listeners about women’s history while living through some of it themselves.

How did you meet?
Kate: Jamia and I met because of the Equal Rights Amendment, if you can believe it. We went to an event with folks who have been fighting for it since the ‘70s. ERA rallies can have quite an older crowd, so whenever anyone’s there under 65, you really stick out!
Jamia: We’re both 40, to be clear, but they see us as “the young ones.”

What made you become real friends?
Kate: We were both raised very religious. I was raised Mormon.
Jamia: I was Baptist, but I went to an all-girls Episcopalian school… And I grew up in Saudi Arabia, where a lot of the Americans who lived there were Mormon. I’ve always had an interest in her religion—or the religion she had then.
Kate: And I tend to gravitate to people who have a long journey, particularly when it comes to their faith tradition. It’s hard being raised in a high-demand faith, and Jamia really gets it.

What made you decide to make podcasts together?
Jamia: We talk about equality all the time, but legally, what does that mean? Kate knows. I really like how Kate can make complex legal strategy accessible to others. She can present these complex cases and make them seem accessible. She can ask people, “How do we argue for better systems?” and really guide those conversations.
Kate: And Jamia has such a broad scope of knowledge about history, about current changemakers, about cultural movements. Plus, everyone loves her. She lights up our podcasts. You can’t not listen to her.

What don’t we know about equality?
Kate: Women are not covered under the US Constitution! Most people think we’re covered. We are not. I didn’t even know that until I went to law school. I’m like, “Hey, I thought we were in there!”
Jamia: When I used to teach college freshmen—really smart kids—they would tell me I was wrong! They’d say, “All men are created equal!” And I’d be like, “Yeah, it does say that. Uh, maybe we want to think about it critically.” Because the words in our policy matter.

This season, every episode of Ordinary Equality is devoted to reproductive rights. Why?
Jamia: Because people think of it as a single issue, and it’s not… I take the wisdom of Audre Lorde, who says, “We don’t live single-issue lives.” Reproductive justice and climate change should be talked about together. Both these problems relate to access. Economic justice and sexual freedom should be talked about together. Freedom isn’t a compartmentalized issue—you’re either free or you’re not.
Kate: I think we’re also demystifying the idea that “abortion” is a taboo word. We’re talking about it on every episode. We’re bringing in people from all over the planet and saying the word “abortion,” and that’s not a bad thing! We should just say the word.

We talk a lot about “who gets a platform?” How do you host people on your show whose views you disagree with?
Kate: I don’t believe there are 2 sides to every issue. Racism is always wrong. Misogyny is always wrong. But I was a practicing Mormon and I changed my mind—and my life—180 on topics like abortion. So I know there are people who can change their mind, too.
Jamia: It’s also important to acknowledge that we’re not at a place where we’re winning. We’re losing reproductive rights state by state. We’re losing at the Supreme Court level. We’re losing rights we took for granted. We can’t give up. We have to convert people.
Kate: And we need to start with our own communities… White women should be doing the heavy lifting about white supremacy. But that work has to be done. We can’t just throw up our hands and say, “They’re hopeless; we’re not talking to them.” Until we’re winning—which we are not, to be clear—we have to be able to have conversations that convince people. And again, I am a person who has been convinced! I have moved from one position to another over time, so I know it is possible.

People are apparently happier if they can admit they’re wrong about something. What’s a gracious way to do it?
Kate: Oh, I love that question. I find the idea of never having changed your mind to be excruciatingly boring. We should embrace change and growth more. We look back and say, “I was so dumb,” but you do the best you can with the information you have at the time. That growth is something to be celebrated. Of course I’m gonna say that, because I was raised in a cult! But I think we should celebrate changing your mind. What’s the alternative? If you were racist, and you realized you shouldn’t be, that’s great! If you were sexist and you changed, great! We need to celebrate changing your mind.
Jamia: I have a friend, Courtney Martin, who said something once that stuck with me. She said her parents taught her to trust her own outrage… and I want our listeners to trust that, too. If we say something that makes you outraged, tell us! And if I say or do something that sparks outrage from others, I want to think about how and why. With fundamentalism, there is a real lack of nuance. It was so freeing for me to know sometimes I was wrong, sometimes the world was wrong, and often, it’s a real mix.