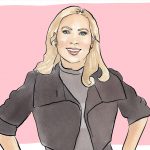 Female founders received a dismal 2% of venture capital in 2017, but Maxine Kozler Koven is on a mission to make sure that number skyrockets. Maxine–or “Maxi” as she signs off in her emails to me– is an incredible breed of investor who actually goes beyond the financial obligation of a venture capitalist, and has made it her life’s goal to increase the amount of female and minority founders who receive money for their startups. Through my conversation with Maxine, I not only realized that she is extremely passionate about mentoring female entrepreneurs, but is also adamant that the best way to lift this percentage is to transform the traditional boys club of venture capital into a female-inclusive environment where women are encouraged to shine.

Let’s start from the beginning. Maxine went to Boston University (also my alma mater), and upon graduation she entered the world of music publishing. Although you may think that music has nothing to do with being the top-tier venture fund founder she is now, that experience actually taught her a lesson she uses even today when analyzing a new venture. Her role at EMI Music Publishing consisted of handling the IP of songs, and inserting them into TV, film, and commercials as a music supervisor. But as a fresh college graduate, Maxine made a discovery that changed the way she looked at her entire role. “What really locked into me was that the value of the song was dependent on how relevant the artist and the songs were. At the time, I was running a catalog of really big older artists, and we did incredibly well with licensing [their songs] for movies and Super Bowl commercials, but it just clicked with me at one point that all of this was only really worth how relevant the artist and the songs are–and as the artists got older, we needed to keep the younger generation learning. And I realized that putting songs into a Disney film was going to remind the parents, as well as get one or two more generations to learn more about these songs and about these artists. So that’s what really opened up my mind to branding, what a brand is worth.”
She added, “That became the platform for me to analyze a company. Is this a one hit wonder?” And Maxine certainly has used that learning to invest in superstars. In 2010, Maxine and her husband Drew were offered the opportunity to fund a little company you may know called Sweetgreen. They got in when there were only two locations–now they’re approaching 100 and have pretty much reached salad world dominance. After that incredibly successful first investment, she and her husband got the venture bug, and decided to open their own firm called LDR Ventures. In the last eight years, LDR has backed other wildly successful startups, including Parachute and Thrive Market. And both founding teams have one thing in common: they include a woman. But believing in female entrepreneurs isn’t all that makes this firm unique. In Maxine’s own words, LDR’s “special sauce” is that they’re operators. The leadership team has run companies of consumer product brands, and other people in their network have experience running product companies as well. “We don’t come from Wall Street or private equity, or other VC’s, we come from actually operating a business,” she notes. “So that’s our lens. That’s how we’re actually looking at businesses as ‘what if we started this business, what if we had to run this business? Do we think that this is a great business and that this founder has the ability to really stay with it?'”

So why don’t women get a larger piece of venture capital?

Maxine answered this question with some research and personal observations she’s made. “After a year of studying this, I’ve come down with my own list of reasons. First and foremost just sociologically, people want to be around people like them,” she explained. “So if you mostly have male VCs, they’re going to invest in men. It’s nature. For the reverse, I hang out with mostly female investors and female founders.” Maxine believes that a huge way to get over this hurdle is to simply encourage more women to invest or become venture capitalists. “One of my initiatives that I work on is getting more female VCs and investors. Promoting female investing solves a huge part of it. Eventually the hope is that women VCs will continue to build a reputation where male investors will see that they’re on a deal and want to get in on it too. The more women investors, the more funding that female founders are going to get.”

Cater your pitch to the investor that you’re speaking to.

By scrolling through their portfolio, it’s clear that LDR knows how to pick winners. I asked Maxine to share what she looks for when she hears a pitch, and what female founders can do to impress when presenting their own company. “The founder needs to understand who they’re talking to. They shouldn’t change who they are, but the information and the way they say it definitely should be catered to the audience. The biggest thing for female founders is that women are overall incredibly realistic about their numbers and projections. So if a woman says ‘I’m going to sell this much and make this much in revenue,’ she’s going to do it.”
That realistic and honest trait may seem like an incredibly attractive quality in terms of gaining investors, but according to Maxine, it can unfortunately be an entrepreneur’s downfall when seeking funding. “Statistically speaking, women are much more pragmatic with their projections, and I know for a fact that they make their projections more than male founders. However, that’s not what most VCs want to hear. Most VCs want to be given a really big vision that you’re going to make these huge numbers.”
“The crazy thing is, you may miss the number and you won’t exactly be penalized for it. They might say ‘oh you missed your number, do you need more capital?'” And in Maxine’s experience talking with female founders, this can be a hard pill to swallow. “They’ve said they were told to inflate their numbers, but told me that they can’t live month after month not making their number because they inflated something that they knew wasn’t accurate. So there’s a struggle.”
But growing your expectations isn’t always a bad thing, Maxine told me. She urges founders to calculate three numbers before going into a pitch: a “worst case scenario,” a “totally on track for” and a “reach number.” Since women can sometimes be too conservative with their projections, she recommends using the last number to guide their company’s potential. “Now I’ve been advising founders to plug the reach number. I’m a really big fan of intentions and manifesting things, and if you put your energy towards the reach number, you’re probably going to hit it.”
As for what Maxine personally likes to hear when a founder pitches to LDR, she goes beyond the numbers and really gets to know the person’s character and their “why.” “We always say ‘what’s the chip on your shoulder? What is going to keep you going when every single brick wall comes up in front of you?'”

Women should help each other succeed

It’s probably obvious by now that Maxine is a huge proponent of helping other women, but she has some advice for fellow lady bosses on one way that they can help put females ahead even if they don’t have a successful venture fund. “Women should be telling other women what they make,” she tells me. She goes on to explain that the more transparency there is between women on salary figures, the better of an idea they will get of if they are being underpaid. Maxine also recommends asking the men in the office the same question. “Women should absolutely go up to their male counterparts and ask ‘by the way, how much do you make?’ Because all of the men are telling each other.”

What is one key reason you’ve invested in founders?

To end my incredibly informative conversation with Maxine, I asked her this final question that I can imagine hundreds of entrepreneurs studying LDR want to know. Maxine responded immediately with, “The founders were all coachable. They wanted to hear, they wanted feedback. They are very happy to have people on board who can contribute to their knowledge, and don’t think they know it all.”
And, with that, Maxine went off to search for her next superstar.